God warned Christians, “See to it that no one takes you captive by philosophy and empty deceit, according to human tradition, according to the elemental spirits of the world, and not according to Christ” (Col. 2:8).  There’s a reason we have this warning.  One of the most effective devices Satan has ever used to deceive mankind are false doctrines and philosophies (Matt. 7:15-20), particularly the false concept floating around these days that truth is determined by its results. 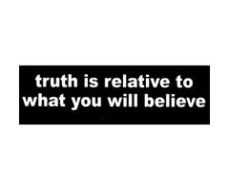 Many believe that truth is defined by whatever works, whatever is good or expedient.  They say a statement is true or false depending on its results.  This has led to the popularity of “political correctness,” a philosophy which seems to promote “tolerance” for everything except Christian commandments and principles.  Therefore, “tolerance” demands that we support abortion and same-sex marriage, and that we must not disagree with any religious faiths (even the ones which go against biblical teaching).  This is different from the notion of earlier generations that tolerance permits each of us the right to believe or disbelieve according to our own conscience.  No, modern “tolerance” demands acceptance of all truths, beliefs, and values…no matter how spiritually or morally bankrupt they are…as being equally valid.

What it all boils down to is this:  What works for you?  That is the key.  If you “need” to have your unborn child burned alive by a saline solution while still in your womb, if euthanasia would make your life easier, or if homosexuality works for you…then those are the right things to do.  “What works” is the governing principle.

Believe it or not, this philosophy has existed from the beginning of time.  Cain and Abel both brought an offering to God (Gen. 4:3-5), but Abel’s sacrifice was offered “by faith” (Heb. 11:4).  Since faith comes from God’s Word (Rom. 10:17), God must have had specifically told them what kind of sacrifice he wanted.  Abel honored what God had said, while Cain didn’t.  The “if it works for me” mindset would have demanded acceptance for Cain’s sacrifice, because what worked for Cain would be all that matters…but God didn’t see it that way.

Nadab and Abihu made a similar error (Lev. 10:1-3).  These two priests decided to off “strange” or “unauthorized”fire in their sacrifices, fire which God had not commanded.  God burned them alive as a result…but they were only doing what worked for them, right?  Apparently that wasn’t enough for God.

Here’s the thing.  “What works” does not determine doctrinal or moral truth.  What determines truth in these areas is and always has been God’s Word!  Read Psalm 19:7-11.  What is the law of the Lord?  Perfect.  What are the judgments of the Lord?  True and right.  What happens when we keep them?  Great reward.  What “is a lamp to my feet and a light to my path”?  God’s Word (Ps. 119:105), not the philosophy of “the ends justifying the means.”